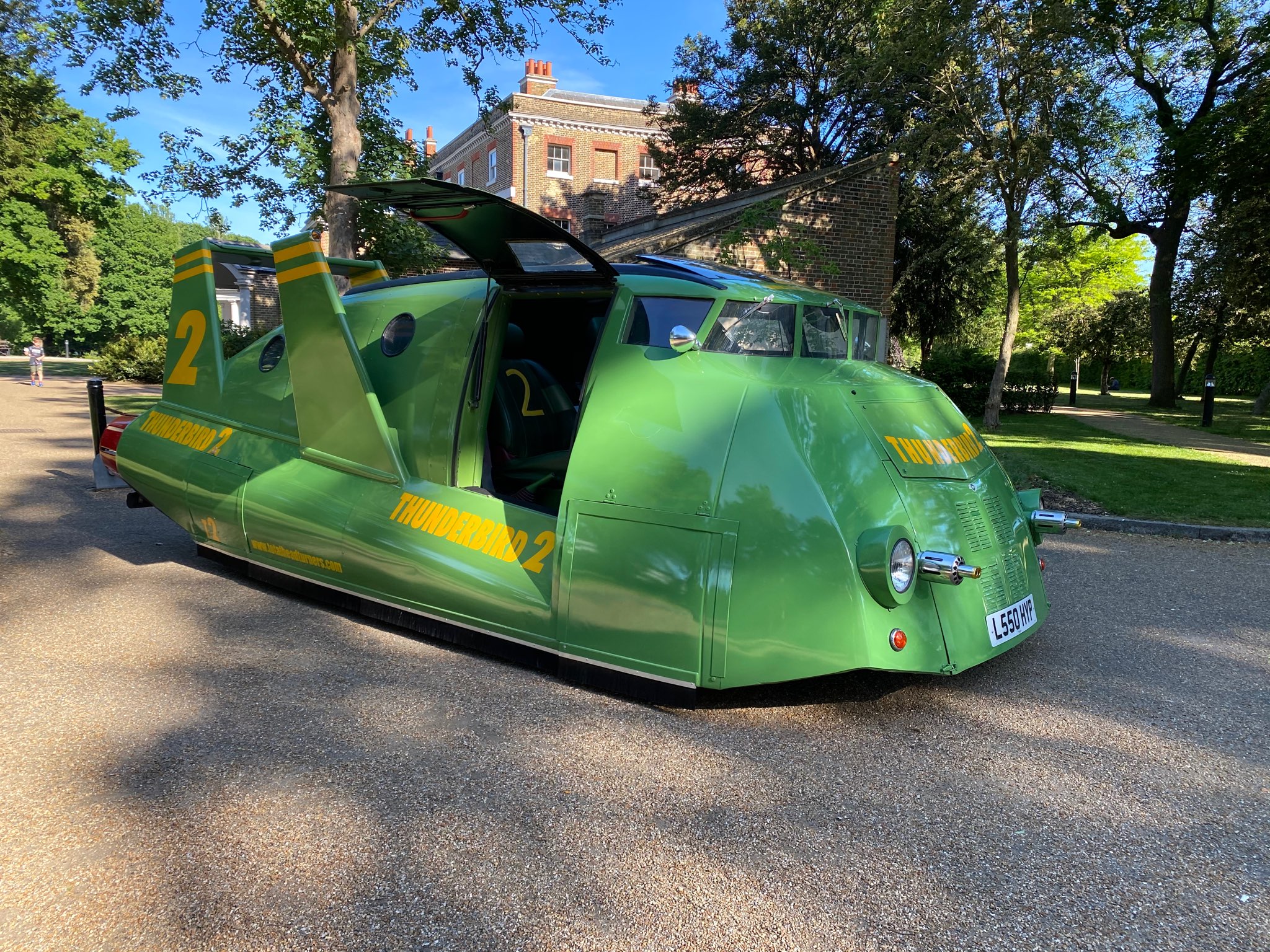 Thunderbirds are go! L.A. Stretch Limos is thrilled to announce the newest fleet addition is Thunderbird 2 – a wonderful unique car hire that captures the imagination of car lovers and big kids everywhere!

The Thunderbird 2 will be available for event car hire and concept car hire as a fantastic, retro addition to your festivities. L.A. Stretch also welcomes partnerships for this beloved vehicle, one of the most famous tv cars in British pop culture history, as a prop for commercial purposes such as promotional launches or photoshoots. Previously this homage to everyone’s favourite Thunderbird has captured public attention with biannual appearances for Comic Con at the Excel Centre in the Docklands and now as an unusual vehicle for L.A. Stretch on London’s streets. 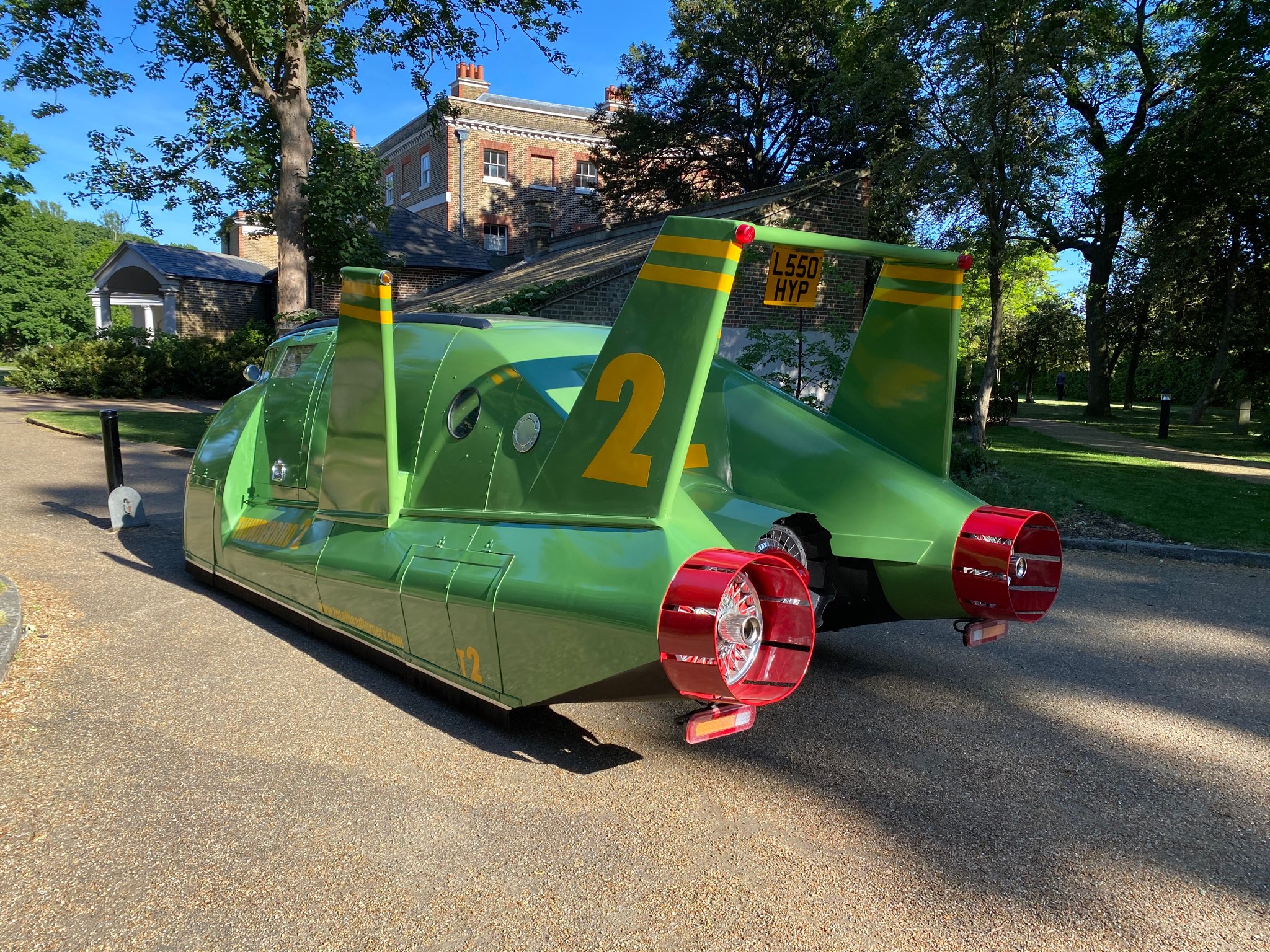 What makes the Thunderbird 2 a nostalgic vehicle?

The nostalgic green vehicle is a supersonic carrier aircraft made famous in the classic British show Thunderbirds. In the science-fiction show originally produced between 1964 and 1966, Thunderbird 2 is piloted by Virgil Tracy and plays a key role in vehicle rescue and equipment transport with its detachable “pod” capsules. Many vehicles that appear in TV shows become treasured favourites of both fans and car aficionados with Thunderbird 2 one of those standout iconic and unique vehicles.

In the classic show that was originally set between 2065 and 2067, viewers are entertained with the exploits of the Tracy family. The widowed head of the family, American Jeff Tracy is an ex-astronaut with five adult sons. Jeff’s sons are Scott, John, Virgil, Gordon and Alan and the Tracys are behind the secret organisation International Rescue (IR) that takes on high-level missions to save human lives. In every episode, they undertake daring rescues with the legendary, technologically-advanced and wondrous Thunderbirds cars that can transport the Tracys across land, water, air and space. The Thunderbirds enable spectacular rescues when conventional methods fail meaning truly entertaining and fascinating viewing for audiences. Each Virgil brother pilots a specific one of the “Thunderbird machines” that’s assigned to them, with Virgil piloting ‘everyone’s favourite Thunderbird’ — the Thunderbird 2.

Since the sixties, the Thunderbirds TV series is still popular and considered a cult classic for everyone who grew up with it whether they watched old episodes or the more recent reboot. Overall, the series was followed by two feature-length films (Thunderbirds Are Go in 1966 and Thunderbird 6 in 1968) then two TV remakes, Thunderbirds Are Go, debuted in 2015 to a new generation of viewers.

How was this Thunderbird 2 replica made to be one of L.A. Stretch’s iconic cars?

So, how do you design and engineer a real-life replica of such an iconic car?

Before joining the L.A. Stretch fleet, the Thunderbird 2 was conceptualised from a Toyota retrofitted as a working, automobile replica of the fictional aircraft. Not only does this green and yellow vehicle reach speeds of up to 90mph, it can seat two people while safely fitting the bill of a working nostalgic car. The detail-oriented exterior is an authentic replica of the distinctive original that brings joy to all who encounter it in a celebration of British pop culture.

Thunderbird 2 is a unique vehicle for events, photoshoots, parties and more

Since L.A. Stretch purchased it in May 2020, the car has had significant media coverage as well as serving as a flagship marketing vehicle for commercial, corporate and event use.

Consider Thunderbird 2 or another one of the L.A. Stretch classic, limousine or luxury vehicles for birthday parties, music videos, marketing and PR campaigns, as well family gatherings and product launches! Finding the right vehicle and package for your dream booking is only a phone call or email away.

Our experienced, professional team will discuss our hire options and we will deliver on service with stylish and statement-making vehicles that meet your every need while exceeding all expectations.

Leave a reply Click here to cancel the reply

What Our Clients Say
All Review